Bayern Moves On And Barca Has Issues 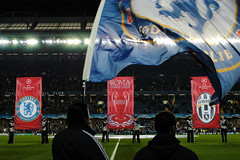 A new final is almost here and it’s getting intense.

Bayern Munich defeated Lyon 3-0 after Ivica Olic scored a hat-trick and the Germans are headed to the Champion’s League Final.  I am so glad I was right about Louis Van Gaal and his motivational tactics–which I’m sure he’ll keep up going into the Final.

Arjen Robben was also excited and he said he wants to see his old Manager, Jose Mourinho, at Bernabeu for the Final.  I’m not sure if he would want to wish for Inter or Barca as an opponent, but I can understand his desire to play against an old boss–whether that boss is friend or foe.

Now Barca has the issue of getting out of a 3-1 hole against Inter.  However, that may be hard is Jose Mourinho is right about Barca’s motivation to win the Champion’s League this season:

“When we came here in November (in the groups stages, when Barca won 2-0), the fans were already singing ‘we’re going to Madrid.  What I want to say to my players is to follow the dream, not make it an obsession, because for us this is a dream and not an obsession – for Barcelona it’s not a dream, it’s an obsession.”

“I was at the (Copa del Rey) final between Betis and Barcelona in 1997 (when the Catalans won 3-2 after extra-time), I was there as a translator but I understood it – to see Catalan flags at the Bernabeu and hear people shouting Barca was a huge thing for them.”

As much as I’ve slammed Mourinho–he’s right.  Barca is obsessed and obsessed teams don’t play well.  Look at the 2007 Patriots–they lost the Super Bowl over a hidden obsession with going 19-0.