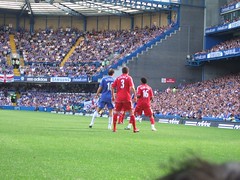 After Inter Milan completely smashed Barca in the first leg of their Champion’s League Semi-Final yesterday I wanted to do some rethinking about Bayern and Lyon.  I had totally assumed that Barca and their fearless leader–Leo Messi–would crush Inter.  Alas, I was wrong.

No, I have to wonder if Lyon is going to succumb to the same kind of “underdog sting” that got Barca yesterday.

You know, Jose Mourinho stays in the media constantly and he’s constantly got a soundbite or something going on that everyone knows about.  Is it really THAT inconceivable to think that this is motivating to his players.  That it’s like a bunch of pirates rallying around their Captain as he insults the Governor of the small principality they have just looted?  Is it really that simple?

I’ll admit it–men are pigs.  We’re beats.  We are.  We can’t help it.  So, how hard is it to believe that a bunch of guys don’t get a charge out a really flamboyant coach?  It worked for Rex Ryan with the Jets this year.  It works for John Calipari–a little.  It worked for Jimmy Johnson.  It worked for Pat Riley.  Why can’t it work for Mourinho?

I think I underestimated how men–especially European dudes who play Soccer–get motivated.  They must LOVE to watch their coach constantly be the center of attention–because that means they look cool and their team looks cool.  I can live with that.

So, Louis Van Gaal has shot his mouth off a couple times prior to this 1st leg with Lyon–particularly about Lyon’s easy schedule–and he’s pissed.  Well, if that kind of pissed off, in the media, nature riles up Inter–it will rile up Bayern as well.

I was wrong–it works.  Talk all you want–I get it now.

Bayern wins this one easily–on adrenaline.