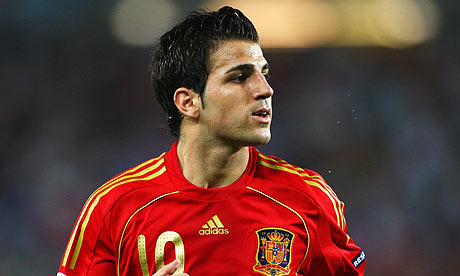 With all the great players heading into Spain this off-season it should be no surprise that even more are beginning to talk about making the move over to the new powerhouse league as well.  This January when the transfer window opens expect at least one superstar player to join last years treble winners, Barcelona.

And the star with the biggest bulls eye on his back right now has to be Arsenal’s Cesc Fabregas.  Fabregas, a key part of Spain’s international squad, is one of the most coveted center midfielders in all of the world and is obviously a critical part of the Gunner’s offensive success.  Fabregas is considered a great all around player and he is just as good a passer as he is a scorer.

Here is what former Liverpool midfielder and Spanish national teammate Xavi Alonso had to say about his Spanish friend:

I’d like to play with him.  I’ve always said that in the national team I link up with Cesc very well, despite the fact that many say we can’t play together.  We demonstrated in the final of the European Championship that isn’t true. I especially hope that Cesc comes. He is a football player with Barca DNA and he is showing at Arsenal that he is on another level.  I would love him to sign and that we could play together at Barca. Clearly, a lot of his career is ahead of him and I think that in the future will be at Barca.

Fabregas would be a perfect fit at Barcelona.  A team that is very striker heavy, Barca doesn’t need any more stars up front.  They need a great player in the middle of the pitch that can distribute these huge players the ball at the appropriate time.

Unfortunately for the Gunners, Fabregas is that guy.