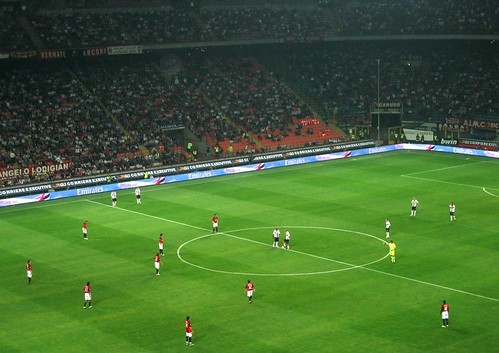 Have you ever thought about what song would capture a great moment of a football match?  I think about this question all the time.  And I decided to make a list of the five best songs (that I think) to use to highlight a soccer montage.

I first heard this song in the feature film Slumdog Millionaire. It is the most upbeat choice that I made for the list.  I could see it being in a movie about little kids playing on some street near their home in a sandlot match.  But the song has already been used recently and is probably off of the market for awhile.  Unless you have Oscar-type money of course.

One of my favorite band’s newest releases Reckoner is like every song made by the band.  Beautiful, complex, and brilliant.  Maybe it is a little too sappy for some fans of football, but perhaps when a club is warming up for the the final match of the season and mentally preparing themselves in the locker room this song would softly come into the background as the announcers hyped the television audience and the coach gave his final speech to his troops.

This song is the most grossly overplayed in soccer replays and highlights on youtube of star players because it fits the most beautiful game that well.  It has become a cliche soccer song for me, but it still has a great introduction.  I imagine as the song begins viewing a pitch from a birds eye view above the venue and slowly tilting down to the action in the center of the pitch.  Truly a decadent introduction to a match if you ask me.

One of the greatest bands of all time is well known for making well… physcadelic-influenced music.  But the truth is that the Floyd have many great songs that most fans of the group have never heard.  Fearless is one of those likely tracks that has been overlooked due to hearing the Dark Side of the Moon album fifty million times.  Still DSOTM never gets old, but this track has football match written all over it.  Especially with the crowd participation.

1) The Last of the Mohicans (theme)

It is time to bring the Michael Mann directed film’s epic theme back.  It was used a few years back in a Nike commercial, but it hasn’t been used for a film in nearly twenty years.  Nothing inspires a glorified battle like this tune.