The Oldest Profession in the Book 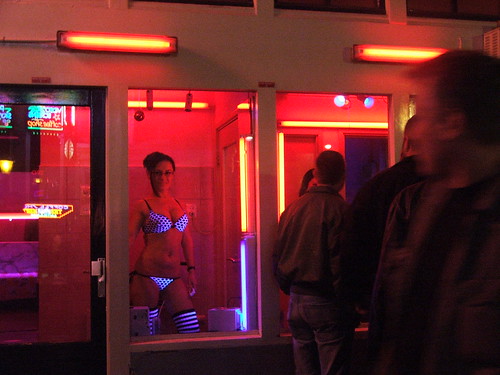 The World Cup in South Africa will bring in hundreds of thousands of visitors to the country.

Among these people who will pilgrimage to Africa’s first hosted World Cup will be footballers along with their families, coaches, trainers, scouts, TV personalities, along with camera crews, newspaper writers, announcers, and other journalists.  Football officials will be there, refs, former Cup stars, celebrities of all sorts, along with worldwide fans of the most beautiful game of course.  Oh and did I mention that there will be around 50,000 prostitutes too?

Franck Ribery won’t even know where to start!

That last group in their might seem a bit out of place compared to the rest, but I assure you that the estimated number is in fact accurate.  In fact in 2006 Germany, the country repealed all laws that banned both prostitution and open alcohol containers and allowed fans of the most beautiful game to enjoy their stay in more of a lawless Wild West type of atmosphere.  This time in South Africa the country is considering going with a similar laid back approach.

It is estimated that around the same number of street corner girls will be attending the Cup this summer in South Africa and several of these young women are making their trip through Africa to the cities hosting the event right now as you read this blog.  But South Africa as a whole is in a heated debate regarding how the situation should be handled (no pun intended) regarding this soon-to-be-arriving army of hookers.

Several South African officials and politicians believe that the countries police should focus on bigger fish to fry and should overlook such meaningless transgressions.  Some officials even support the notion because they believe that the addition of prostitutes will actually reduce the amount of crimes that will happen in South Africa over the next few months.  And these selected officials have been labeled “perverts” by many citizens of the country.  Other officials believe that the country shouldn’t allow their moral code to be corrupted due to the commercial appeal the tournament will bring to their country.  they believe that supporting such an illegal act is ridiculous and completely out of line.  And these officials have been labeled “cock blocks” by many of the citizens as well.

Either side of the fence you stand on the issue of prostitution, the ladies have packed their fishnet stalkings, perfume, and flashing red lights into their travel bags and they are marching to South Africa in herds right now and there is nothing really that can be done to stop these ambitious women from a hard days work.

Say what you want about the moral code of the issue, but it seems when an event this big is hosted in an environment that has never had before then several illegal acts are bound to run a muck.  Some things just can’t be stopped and even if the transgressions all could be stopped then at what great price should the police go to stop these sorts of things from happening anyway?

Crime is a big issue for the World Cup or any big sporting event, but, personally, I think the real immoral act to worry about in South Africa this summer is not lustful transactions, but the act of random violence.  Sure paying some money for the No Pants Dance is frowned upon, but at least it isn’t murder (which happens at football events all the time).  But that is just my opinion on the matter at hand.

And in other news, Charlie Sheen has recently declared he will be attending the 2010 World Cup in South Africa.