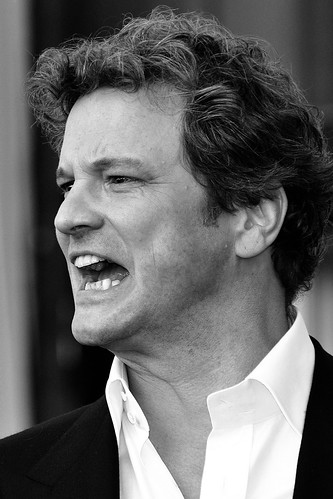 Many great sports movies have the evil media representative that plagues the team with negative story lines and expects the team to inevitable fail at the end of the season.  This pressure from the media creates a conflict in the locker room for the club and in some cases it gets our protagonist to begin to doubt his own abilities on the pitch.  And in some of these movies the evil media guy even manipulates some of the team’s players through his cunning ways of attempting to get the best inside scoop.  Classic movies like The Natural have the slimy reporter at the center of the conflict and even cheesy films like Any Given Sunday or Angels in the Outfield use this character to create more of a dramatic conclusion.

But who should be the slimy journalist in STO the Movie.  Let’s take a look at the candidates.

Firth is usually considered type cast into the roles of the stoic love interest in some chick flick that I haven’t seen (with the exception of Love Actually), but this year he really broke the mold with his role in A Single Man.  Firth was nominated for his first Oscar in his career for playing the role of a gay man.  He usually plays the overbearingly nice guy, but I’d like to see what he could do with the role of the scummy television personality that is always ripping the coach and the team of our beloved protagonist.  I can’t really think of too many times that Firth has played a badguy, but I could see him breaking the Bridget Jones Diary streak once again with such a role.

Jude is great at playing the role of the obnoxious, cocky guy and he is from London, England so he should know a lot about the EPL.  Perhaps he could channel the same type of character he played in The Talented Mr. Ripley, but hopefully we could remove all the weird scenes where Matt Damon is lustfully staring at Law.  The Slimy Journalist doesn’t need an assistant intern journalist that is a complete weirdo.  If you haven’t seen The Talented Mr. Ripley yet, then do yourself a favor and don’t.  As for Law he kind of needs to bounce back from playing Holmes’ assistant, Watson, and choosing the role of the slimy journalist is quite an elementary decision.  My apologies for that.

You don’t see as much from Cary Elwes as you did in the 1990’s, but the Robin Hood Men in Tights star is often type cast as the snobby reporter or hot shot television personality in such films as The Chase and Twister.  Elwes does have one interesting movie that he could potentially star in as a voice actor coming up sometime soon.  It is a film called Yellow Submarine and Elwes is currently cast as the voice of George Harrison.  None of the original Beatles are in the film, but it is apparently a 3D movie about their trip to Pepperland on the Yellow Submarine and their escape from the Blue Meanies.  Sounds extremly trippy and like something to take the kids to.  But Elwes should consider the role of the slimy journalist once again.

I especially like this one because isn’t it ironic.  Don’t you think?  Grant was of course infamous for receiving a BJ from an LA street corner girl and of course he was publicly humilated for the act due to the fact that he was currently dating superfine Elizabeth Hurley at the time.  And of course the guy plays the foppish love interest in every movie he stars in.  But the ladies still love the guy despite the fact he was caught doing the no pants dance in the backseat of his car with a girl that had never heard of Benjamin Franklin in her entire life.  So after starring in the tabliods, why not become the voice of the media?  Grant would be pretty good at it, but he probably wouldn’t want to open back up that door.

“You are absolutely horrible.  Terrible.  Dreadful.  Humiliating.”  Simon Crowell already has the lingo to be a judge of football too.  And lets face it the guy knows talent, so not only could he basically play himself as a fake football TV personality, but he could also cast all the actors in the movie too.  Lets face it Simon knows a star when he sees one.  The guy even predicted that the Pants On the Ground Guy would have a hit song when he orignally perfomed on the show.  Simon knows his stuff and he speaks with such a sharp tongue that you just want to gag the guy when you hear his voice.  In other words he is the perfect TV personality.