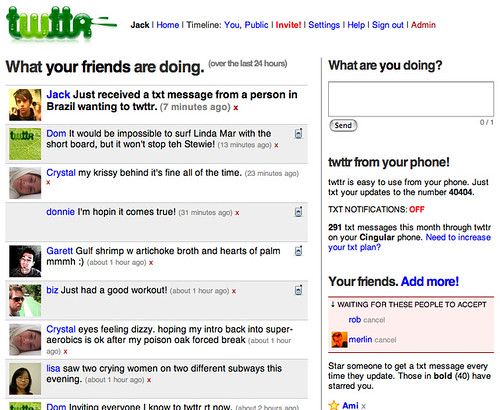 First there was Myspace.  Then that became a little bit too creepy and everyone moved over to Facebook.  Now its all about Twitter and the non-stop “tweet”ing action.

And in America the top four pro-sports leagues (NFL, NBA, MLB, NHL) are also in the top four for most twitter followers, but what is truly shocking is what sport came in fifth place.  I’ll give you a hint.  It’s not Nascar and its not the MLS.  And its not MMA or the WNBA either.

We had players Tweeting during games last year.

And with Internet access at the tip of a finger tip, the modern day athlete can now fully express their feelings on a match as it is underway.  And apparently the WPS is the most in-demand sport that isn’t well known across the globe.  And does this social networking device spell good things for a league that is just taking flight or is the idea of athletes over-promoting a match while it takes place a deflating feeling?

I think in the case of WPS it is a good thing because the league is just getting started and trying to grab fans anyway possible.  If reading a tweet about an athlete that just scored a brilliant goal makes the fan more attached to the league then so be it.  Although phones should not be used on benches, I think the act of sending a tweet at halftime or at the end of a match has a very small affect on the match at hand.  As long as the tweets are positive and not attacking a player, coach, or referee during the match then who cares what they write.

In fact who cares what anybody writes at all on twitter.  If you need to know what Kirstie Alley ate for breakfast then maybe you should find a new hobby anyway.  But for the WPS tweeting could end up being a very important marketing tool for the league down the road.

And that is Tweeting fantastic.