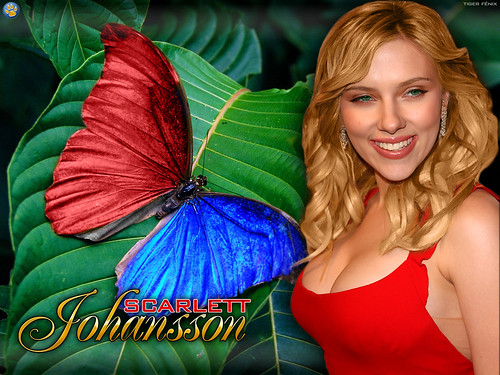 We already have the director, the star, the wise old coach, and the evil owner lined-up for the production of Soccer the Movie now we need the lovely leading lady that will motivate our star player to change his life for the better on and off of the pitch.

They say behind every great man there is an even better lady and that is most certainly the case when it comes to most sports movies.  Where would Rocky be without Adrianne or the Kirate Kid without his lady friend whose name escapes me at the moment?  What would have happened to Gary Busey in Rookie of the Year if he hadn’t slept with that kid’s mother?  Or the center fielder from Little Big League that pulled off the same move?  The answer to these questions is that we do not know what would have happened to them.

I don’t know what it is about Scarlett that makes men wild.  It is probably her very perfectly, round, firm… eyes and that is without a doubt her best feature.  What eyes aren’t firm?  Sure they are.  And Scarlett is the winner in my book.  But I am a little apprehensive about allowing her to go across the pond for the sake of the movie.  Do you agree that we Yanks should protect her and stoy her away in the Pentagon or was this whole joke just Lost in Translation?

Knightley is a true beauty in every sense of the word and made the Pirates of the Carribean franchise worth watching with her swashbuckling sidekick Jack Sparrow.  She is from England, so she would like understand the game of soccer more then Scarlett would.  But the one thing about her that Scarlett has the major edge on is if a light wind picks up on set Ms. Knightley might just float away like that feather in Forrest Gump.

One of the hottest leading ladies in the world, Cruz has been nominated for three Academy Awards in the last four years and she won the award for Supporting Actress a year back for Vicky Christina Barcelona.  The Spanish goddess was born in Madrid too, so I am sure football is her favorite sport.  And if you have seen even a sliver of her work this year in her Oscar nominated role for the film Nine then you are probably wondering why she came in third place on this list.  On second thought I am wondering why she did too.  Damn.

The red head is a little bit stranger then the rest of the candidates, but something about this zany Scottish and Australian’s personality is simply irresistible.  Fisher is married to Borat though and that makes her lose a few points in my book.  Still I would have to say that she is one of the best gingers around right now and the funniest candidate by a lot.

Do you want to go to work Amy?  No, no, no.  What about rehab Miss Winehouse?  No, no, no.  Anyone named Winehouse is destined to turn out with a terrible substance abuse problem.  It really isn’t a joking matter, but anyone that has such brilliant lyrics to their songs is subject to ridicule.  She’s never acted to my knowledge and I don’t think now would be a good time for the troubled singer to start.  So how about you take a shower Amy and clean yourself up?  No, no, no.