US National Team Still Has Plenty of Work To Do 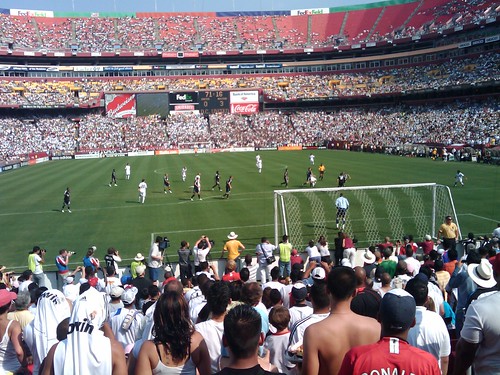 They were playing the third ranked team in the world.  And the final score was 2-1. So all in all you can’t be too critical of the U.S. performance in the friendly against the Dutch earlier in the week, right?

The U.S. didn’t play terrible in the match and in fact as the ninety minutes unfolded the Americans looked stronger and stronger leading up to the finish.  But one issue that bothered me was that many of the ESPN announcers were making it sound like we nearly won the match or at least played up to par with the opponent.

Sure Beasley had a chance to even the score in the remaining moments of the match off of a penalty from just outside the box.  And sure we did have a level score for the second half of the battle.  But to be honest I think the U.S. was lucky that the score finished the way it did.  In fact I don’t really foresee any way the score could have improved in the U.S. favor.

One reason why I feel this way was because of that uncalled handball in the first half by Bornstein.  If the officials didn’t make the error then the score would have likely been 2-0 heading into the second half and an entirely different match.  But on the flip-side the first goal we gave up was a huge mental mistake (by the same guy) and it never should have happened.  But it did happen and defense is our club’s major weakness and stupid fouls from behind in the box are a real likelihood when we play such excellent teams.

But it just seemed like the Dutchmen were toying with us most of the match and their was really nothing our boys could do from stopping them from doing that.  Robben especially just looked like he was having some fun out there and thankfully he never fed that perfect cross to a wide open potential goal scorer (although he was close about four times).

The shining hope of the squad was Howard in goal though.  He limited the number of Dutch goals and kept us in the match.  I’m not saying the dream is gone either soccer fans.  I’m just saying that it didn’t make me believe any more that we can pull off the impossible.  I felt similar after our less then spectacular victory a week back over El Salvidor.  In that game the defense handed the other team a goal as well.

I’m not saying it is over yet, but if our defense hands the other club’s goals in the Cup then the road to the finals will be a lot rockier.