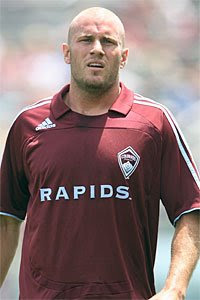 At 28 years old Conor Casey was a relatively unknown player until a few years ago although the forward did turn some heads as a collegiate player.  Casey was named Sport America’s Freshman of the Year during his career at Portland and he also lead the NCAA in goals scored during his Sophomore year with 23.

In 2000 Casey was given the honor of playing for the U.S. in the Summer Olympics and the forward decided to leave his studies and pursue a career in German football.  For four years Casey played for German powerhouse Dortmund, but the forward was often transferred elsewhere or spent his time riding the pine.

After a brief year-and-a-half stint with Mainz, Casey decided it was time to come back to the States and continue his career in the MLS.  Originally on Toronto, he was quickly traded to Colorado where he has played for the last two and a quarter seasons.  After a brief 11 match season (he was cut by Mainz in late February) with Colorado, the forward would settle in and become one of the best forwards in the MLS over the next two years.

Casey has scored 26 goals over the two year timespan and the former college star is now a reliable member of the U.S. national squad.  Casey will likely not see too much playing time if the U.S. can make the World Cup, but expect Casey to play during the key remaining minutes of many of the matches.  Casey’s role on the squad could end up being just as critical as any other member.