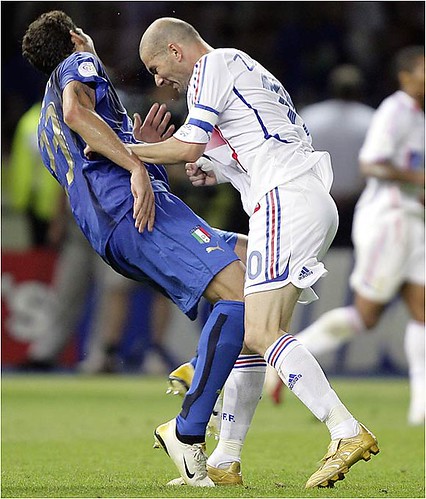 France’s 2-0 loss to Mexico puts them in a terrible position for their final match against the hosting nation.  With only one point in their first two matches, where did it all go wrong for the supposed powerhouse?  The SATO breaks it down:

1) It All Starts with the Coach

It appears that Raymond Domenech is more focused on Michael Scott style team building activities rather then properly preparing his team for a football match.  They climbed glaciers, raced dune buggies, and probably skydived and fought bulls too, but none of these extra activities have helped the reeling side score a single goal.  The guy has already been replaced following the Cup and maybe he should have been replaced before the start.  His roster moves have been bizarre to say the least and more and more the guy reminds me of Inspector Clouseau (credit to SI for this joke).

2) Henry and the Attack

Henry isn’t to blame because he hasn’t been on the pitch for any real length of time and the guy should be a winger and not the featured striker up top.  His only minutes he spells Anelka; whereas the only way he would ever be a factor is if you pair him with the burner.  Henry is old, past his prime and isn’t to blame.  Once again though Domenech should have found a way to make the legend a part of the squad and not just a fancy prop on their bench.

I know two things for sure about Franck Ribery.  The man is an extremely talented player and he is destined to be an evil henchman in a Bond film.  I’m not going to humiliate Scarface for the mistakes he made in his personal life.  After all the girl he allegedly slept with was the definition of jailbait.

Too many players in the Cup dink the ball around the box afraid to score, but Gourcuff is certainly not one of these guys.  In fact I’m not sure if he realizes that you can shoot from closer then 30 yards out.  Gourcuff isn’t bashful about trying to score and so far this tournament he has hit just about everything in the stadium, but the net.  Bombs away! But of course not playing at all against Mexico doesn’t make much sense even though he was terrible in that first match.

Against Mexico the guy makes a risky move trying to catch a player offsides and is burned for a goal.  Then to try to make up for the lapse he forces a penalty kick in the box due to a stupid tackle just to guarantee a loss.  Defenders rarely get credit and Abidal deserves none for his poor judgment last match.

6) The Rest of the Team and Zidane

Zidane claims the team is made of individuals and their coach doesn’t have a clue.  Sounds like the FFF has potentially found a new coach (unless Ribery’s friend wants the task).  Who else could juggle so many egos in one room other then the most famous former French national team footballer?  His critical comments couldn’t have come at any worse of a time for his former side, but I think he said it to try to throw some cold water on the unmotivated team.  I like Zidane as a future manager, but just don’t talk back to the guy.