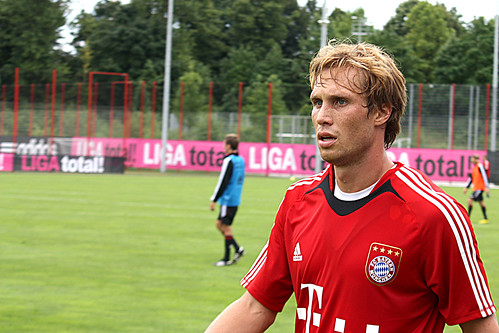 Leaving Rome as beaten player, Bayern Muechen’s Andreas Ottl reportedly has made a name for himself in front of the As Roma management that reportedly are interested in signing the 25-years-old midfielder.

Reports claim that the capital club were liking what they saw from the German international especially in the first 45 minutes when he managed to replace Bastian Schweinsteiger role in Bayern with an ease.

Despite being in the losing side, especially in the second period, Ottl’s performance on the game is worth watching as he was statistically the most hardworking player on the pitch. Aside from his fine performance, the fact that the player’s contract will run out next summer also gives all the more reason that Roma are very keen to sign him considering the 25-years won’t cost them anything next season.

Bayern themselves won’t be that distracted should Otll do decide to leave the club as the Bavarian still possessed other players on that position notably the regular starters such as Schweinsteigger and Mark Van Bommel. Having the status as a bench player, could possibly push the 25-years-old midfield dynamo to accept Roma’s bid especially if the Italian giant are really serious with their offer. Playing in another big club, with the opportunity to be a regular started is definitely an interesting preposition for a player.

The capital club themselves are understandably looking for a new blood in the midfield area as some of their regular midfield players such as David Pizzarro and Simone Perotta aren’t that young anymore. Surely as the season goes by, those older players won’t be performing as good as when they were younger, so picking up a fine utility player to partner Daniele De Rossi in that mid area is surely a good plan from the Roma’s management.

However, considering next summer is still pretty much far away, there’s no guarantee that the Italian outfit would still have the same interest on Ottl next summer especially should the Italian giant managed to get a new owner that can provide them lots of cash. Should that happen there’s more chance that the capital club would try to persuade a much more “expensive” stars rather than opting on a cheap solution.