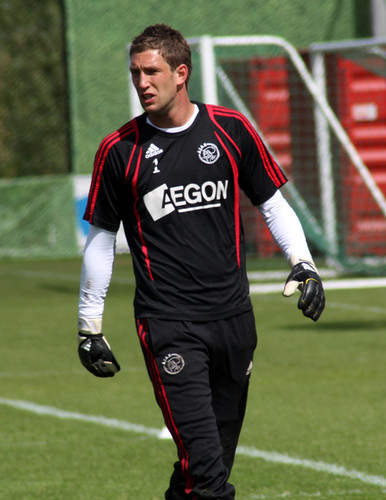 As Roma’s transfer strategy this season keeps moving on every direction as latest reports from Italy suggested that they are very keen in acquiring a new goal keeper and Ajax Amsterdam’s Maarten Stekelenburg has now become the strongest candidate for the capital team.

The Giallorossi’s interest towards the Dutch keeper has been confirmed by the Italian giant’s director, Walter Sabatini, adding that Gianluca Curci, the keeper who they just re-claimed from Sampdoria might be leaving the club.

“Maarten Stekelenburg? It’s true that everyone would like the Ajax shot-stopper. Gianluca Curci is a Roma player and came from our youth academy, so he could be useful in the UEFA squad list, but it is possible he won’t stay with us,” Sabatini said.

Roma’s chance in getting the Stekelenburg is also pretty big since the player’s agent, Robert Jansen, reveals that his client would be open to play for the capital side, encouraging the Giallorossi to make an official offer towards Ajax. Considering the fact that not that many big clubs are currently continuing their interest on the Dutch international goalie, the Italian giant might get him should the player’s current club agrees with what the capital side have to offer.

“Maarten can come to Roma, absolutely. If the Giallorossi make an official proposal, then as far as we are concerned Roma have the priority,” Jansen revealed.

Roma’s strong interest in getting Stekelenburg reportedly is fueled by their potential failure in acquiring talented Italian goalie, Emiliano Viviano, after the player’s ownership has already being fully acquired with one of the Giallorossi’s rival, Inter Milan. Reports from Italy suggested that previously Viviano is very close in signing for the capital side as they have an agreement with Bologna, who at that time still owns half of the keeper’s contract.

Unfortunately, that deal supposedly broke down as Bologna lose every share of the player’s right to Inter after the Rossoblu lose the blind auction with the Nerazzurri in acquiring the player’s full rights. Ridiculously, it was a pretty silly human error that lead to Bologna’s failure in beating Inter’s bid in getting Viviano, a condition that not only disappointed Roma but also the Rossoblu’s president.