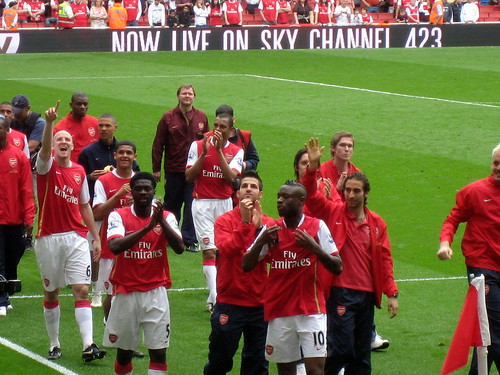 Arsenal is already missing Cesc Fabregas.  They already think they’ve seen “weaknesses” in Barca.  Now, they have more problems.  Arsenal’s midfielder Alex Song has been confirmed as having a groin injury.  In fact, he isn’t even making the trip to Camp Nou for the Gunners’ second leg in the Champion’s League against Barca.

This goes back to what I said about weaknesses.  Barca now has another hole to run at all night.  There’s no reason why they won’t be pushing Song’s replacement looking for a free opportunity.  Right now it’s pretty obvious that Arsenal has some pretty major weaknesses and Barca can exploit THEM instead of the other way around.

Now, does this mean that Arsenal is going to get blown out at Camp Nou?  Yeah, probably.

They’ll be in Spain, without two major players, and playing–probably–the best club team on the planet.  They might get really kicked aorund.

Now, if the match doesn’t start out that way people need to realize that these things happen all the time.  When the stronger team is ALOT stronger they sometimes fool around with their opponent for a few minutes just to see what will happen.  They spend–many times too long–time trying to figure out how to best exploit their opponent.

Well, in that process goals are usually given up.  So, it won’t be a shutout, but it will still be really bad.  Barca just has too much and they are too focused.  They want the double trophies and they are really close right now.

Let’s try to be conservative because of the “sizing up time” that Barca will take.  If you are not thinking of watching this match you should.  Not to see Arsenal get destroyed, but to see how crafty Barca will be after they figure this thing out.  It will be some beautiful Soccer once they decide what to do.