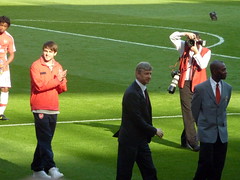 Sebastien Squillaci, of Sevilla, is almost an Arsenal player. Arsene Wenger, the Arsenal coach, has confirmed that his club are in negotiations with Sevilla to sign the centre back but has insisted the two clubs are still some distance apart in their respective valuations. It appears Sevilla are holding out for close to £6.5 million whereas Arsenal are unwilling to go beyond £5 million. The thirty year old defender who has considerable international experience is only expected to be third choice at Arsenal, behind Thomas Vermaelen and new signing Laurent Koscielny. Squillaci has previously played for Monaco and Lyon.

At Monaco he was part of the side that reached the Champions League final in 2004, when Didier Deschamps was manager, but he only started on the substitutes bench in that game. At Lyon Squillaci won two consecutive league championships but was sold on to Sevilla after Lyon decided they wanted to try a different defensive approach with different players. At Sevilla Squillaci didn’t have the best of starts before finally establishing himself as a first team regular and winning the Copa del Ray in his second season, defeating Atletico Madrid in the final. Should Arsenal and Sevilla agree on a fee, and there appears little reason to suggest that they won’t eventually reach a compromise, then Squillaci will join a large group of already established Frenchman at the Emirates.

Thirty years old Squillaci has apparently asked Sevilla to let him go, aware that this is probably the last time a club as big as Arsenal will offer him the opportunity to play for them. Sevilla are not exactly reluctant to let him go, aware that they can recoup the transfer fee they paid for him previously with perhaps even some profit attached, after receiving two years service from the player.

Squillaci is a capable player, calm and composed on the ball and effective enough in the air to offer decent defensive protection against the style of play that lesser teams usually adopt against Arsenal, namely a brand of direct and aggressive football. However Squillaci has never exactly proved himself a man for the big occasion, often failing to perform at the required level when Lyon were involved in big matches and then doing the same for Sevilla against the likes of Barcelona and Real Madrid.

The potential move comes as a bit of surprise for Arsenal fans who were expecting Arsene Wenger to approach a younger and more reputable centre back, perhaps somebody like Per Mertesacker of Werder Bremen or Phillipe Mexes of Roma.