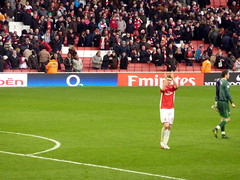 Nicklas Bendtner had the second three-goal game of his Arsenal career as Arsenal hammered League One side Leyton Orient 5-0 in a fifth-round FA Cup replay while Manchester City beat Aston Villa 3-0 to also reach the quarter-finals.

Marouane Chamakh and Gael Clichy also scored at Emirates Stadium as Arsenal advanced to a quarter-final matchup against Manchester United on March 12. Leyton Orient had forced a replay with a 1-1 tie on Feb. 20.

“It was important that we had a response tonight after what happened at the weekend, and we did it in a professional way,” Arsenal manager Arsene Wenger said, referring to Sunday’s 2-1 loss to Birmingham in the League Cup final.

Man City convincingly beat Villa behind goals from Yaya Toure, Mario Balotelli and David Silva and will host second-tier Reading in the quarters on March 13. Midfielder Michael Bradley, son of U.S. coach Bob Bradley, made his first start for Aston Villa and played until the 71st minute.

City is seeking its first major trophy since winning the League Cup in 1976.