Arsenal and deja vu – The fans are demanding changes 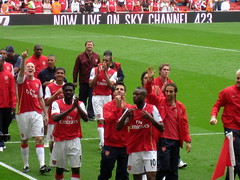 What we witnessed in the Carling Cup four or five seasons ago, a technically brilliant young Arsenal side which was unable to win the trophy, has been transferred to the Premiership. What we see now in the Carling Cup from Arsenal is simply expected, stupendous victories by a group of youngsters against experienced opposition. What we see now from the youngsters of four or five years ago is Arsenal flattering to deceive and ending up in third or fourth spot. Of those young players who lost the Carling Cup final to Chelsea Justin Hoyte was released, Armand Traore rarely plays, Phillip Senderos has moved on, as has Jeremie Alliadiere, Theo Walcott has digressed and Abou Diaby is considered a squad player, not a guaranteed starter. Only Cesc Fabregas has achieved what was expected of him, perhaps even exceeding those expectations a little. For the others who played in that final, and the rest who featured before and afterwards in other impressive Carling Cup campaigns, little has happened. It seems to never change. A young squad moving into middle age (in football terms, anyhow) without a trophy to parade.

The likes of Robert Pires, Thierry Henry, Sol Campbell, Gilberto Silva, Kolo Toure, Emmanuel Adebayor have moved on and the club has stood still. Promising plenty and delivering little. Even aesthetically Arsenal are overvalued. The football on offer at the Emirates is indeed attractive but it rarely reaches the levels the Match of the Day pundits like to believe. Simply put, the team, like the majority of the individuals from those previously relatively successful Carling Cup campaigns, has not improved sufficiently. What does Arsene Wenger do about it? Replace one defender, William Gallas, with another, Laurent Koscielny. Replace one striker, Eduardo da Silva, with another, Maroune Chamakh. Arsene Wenger appears to be sticking by his goalkeepers, by his defenders, by his midfielder players and his attackers.

A year later it will all be different, or so Arsene Wenger believes. He might yet turn out to be right this time but he has been wrong five times before and the Arsenal fans are vindicated to believe the same is happening again. Every year they see the same script, from June to May. Arsene Wenger says the same things and yet nothing changes. At the Emirates the fans will see a promising young team on show in the Carling Cup, a relatively attractive first team on display in the Premiership and then a disappointing finish as usual. To do the same things repeatedly, see that they don’t work and then expect a different result the next time. That’s the Arsene Wenger way. Some might call that sticking to your principles. Others might call it mad. Arsenal fans want signings and they want them now.