Arsenal and Chelsea each score six 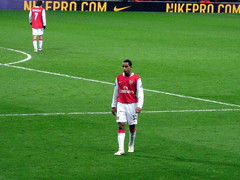 On afternoons like this, Arsenal defeating Blackpool 6-0 and Chelsea doing the same to Wigan, you will naturally query the claim that the English Premiership is the best in the world. Indeed the abilities of the elite clubs, namely Manchester United, Arsenal and Chelsea, are rarely questioned, at least not at a domestic level, but some of the teams in the lower echelons of the league truly do leave plenty to be desired. The shame is not so much that Arsenal and Chelsea won by six goals but that nobody was at all surprised by the margin of the result. The results were, in some way, expected.

Theo Walcott scored a hat trick for Arsenal, suggesting he is approaching the form of 18 months ago. After not starting for Arsenal at Anfield, in the last round against Liverpool, Arsene Wenger, the Arsenal coach, decided to put Walcott in the starting line up against Blackpool and the young winger vindicated his managers faith within minutes by opening the scoring. Arsenal were fluid in their movement from the opening minute and were even able to introduce Robin Van Persie and Cesc Fabregas from the bench for the final half an hour in an attempt to bring the two World Cup stars up to match fitness. Winning by six goals without their two best players starting will be of great satisfaction to the manager and fans. However we shouldn’t dismiss the fact that Blackpool didn’t in any way make the task difficult for Arsenal, defending poorly from the beginning and even effectively gifting a couple of goals to the home side towards the end.

Similarly Wigan did the same for Chelsea, defending atrociously, allowing last season’s champions a free reign when attacking. Nicolas Anelka and Salomon Kalou both grabbed a brace of goals but what will satisfy the manager Carlo Ancelotti most was Yossi Benayoun grabbing his first goal for Chelsea since moving to the club from Liverpool. Winning by seven goals in the first round and then six goals in the next indicates Carlo Ancelotti will not abandon the style of attacking play which proved so successful for the club last season.