Are Liverpool Football Club’s financial troubles about to be over? 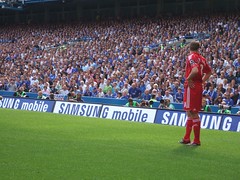 It appears Chinese businessman Kenny Huang is close to securing a deal which would put him in charge of Liverpool. It appears the finance making the deal possible is not entirely his own, rather, he is leading a consortium. This suggests the finances in place will be the bare minimum and Liverpool fans should not hope for a benefactor like Manchester City have, Sheikh Mansour bin Zayed Al Nahyan. Sources close to Kenny Huang have seemingly suggested, if a takeover is successful, there will be money to buy players and improve the squad and begin development of the new proposed stadium.

This idea, of money to spend and a new stadium, is something Liverpool fans have heard before though. George Gillett and Tom Hicks, the current Liverpool owners promised the same when they took control. Not only were they unable to raise the money to develop the new stadium but Liverpool hardly created a storm in the transfer market. George Gillett and Tom Hicks did spend money on transfers, that cannot be denied, but not to the extent they implied they would when they took control. Liverpool fans will know not to believe the same promises twice. Liverpool fans want substance, not just words, and if Kenny Huang is successful in his takeover he will need to placate angry fans immediately, perhaps by convincing Fernando Torres to stay and securing a couple of big signings, regardless of whether Javier Mascherano decides to leave.

Current rumours suggest that Fernando Torres’ Anfield career is dependant on current owners Gillett and Hicks leaving. If the two leave and Liverpool sign a couple of notable players, it appears, he would be happy to stay. For Liverpool to progress it is imperative that Fernando Torres stays. Without him expectations for the season would have to be readjusted dramatically, from contemplating a challenge for a top four position to just aiming for consolidation inside the top seven.

Martin Broughton, the Liverpool chairman, whose remit appears to be, purely, to find new owners, has confirmed Mr Huang’s interest but suggested there is more than one offer on the table. Naturally, this suggestion will be treated sceptically, seen as merely a ploy to drive up the price of the club. With less than two weeks until the English Premiership season begins, Fernando Torres’s future far from certain, Javier Mascherano trying to force through a move to European Champions Internazionale Milan and Liverpool yet to make an important cash signing this summer, Joe Cole arrived on a free transfer, Liverpool’s chairman will understand the importance of finding a buyer as soon as possible. Unfortunately for the fans, any potential buyer will be aware of the fact and use it is a bargaining tool. Liverpool fans are on the outside watching and waiting. The financial troubles continue, the quality of the playing squad is not improving sufficiently and the proposed stadium is still a long way off.