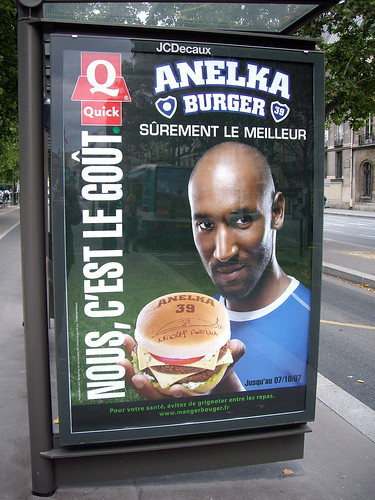 Nicolas Anelka wants to set the record straight regarding the locker room tirade this summer that saw the Chelsea man expelled from his French national team side.  Anelka wants the world to know the he, personally, is not ashamed of his own unruly behavior and if anything believes former national team manager Raymond Domenech is the one who should regret any decisions that were made for the disappointing squad.

In fact Anelka claims that the biggest regret of the entire Cup was that Domenech did not play the striker in his typical position.  Seriously, that is what Anelka saw as the biggest problem:

My biggest regret is that I was not given the chance to play in my best position. If the coach wanted to take a player which stays in the box, he shouldn’t have picked me. He made a casting mistake. It’s the coach (not the players) who should be ashamed after his refusal in front of the world to shake hands with the coach of South Africa.

And I do agree with Anelka that Domenech didn’t handle himself well and certainly didn’t make the best decisions for his nation either.  But to claim that somehow because of this that Domenech is fully responsible for the French side’s collapse is ridiculous.  Apparently if Anelka doesn’t get to play his exact position then you can expect a foul mouthed tirade? Apparently because the coach is a jackass that refuses handshakes that means his players can refuse to practice days before this act?

Sure Domenech embarrassed his nation by the handshake refusal, but one important piece of information Anelka is keeping secret is that while Domenech refused to shake hands, Anelka was already packed and on his flight home from South Africa considering he acted like a spoiled child well before that final moment of the Cup.

France had many problems this summer and Domenech certainly was not the only person guilty of embarrassing the French nation.  In fact Anelka not only embarrassed France, he embarrassed himself.

And he proved to the world that the Incredible Sulk is alive and well.