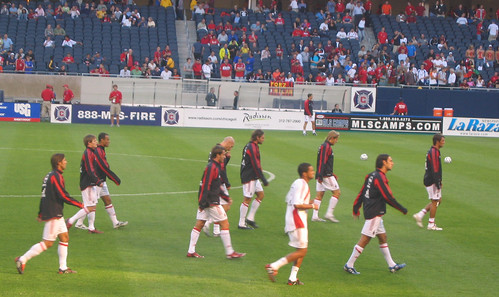 Massimo Ambrosini follows the footsteps of his fellow Ac Milan teammates by signing a one year contract extension on Thursday, May 19 at Milan headquarters, confirming that the captain will continue his role in quest for more trophies next season.

Ambrosini’s extension is also one of those that have been expected by many as the player still being considered useful in Massimiliano Allegri’s system, where he mostly being played in front of the defense this season.

“A.C. Milan announce that Massimo Ambrosini has extended his contract to June 30th, 2012,” said a statement on Milan’s official site.

Ambrosini’s extension pretty much guarantees that Milan won’t be purchasing another defensive minded anchor as it seems the captain will take turn with Mark Van Bommel in playing that role in the summer. Although both players are not young but they will likely be accompanied by younger players in the midfield, as the Rossoneri already plans a younger team setup next year, which would make things much more easier for Ambro and Van Bommel.

Speaking about his new contract to the Italian press, Ambrosini stated that he is delight with the deal and although being made to wait until the last day of the Italian Serie A competition before knowing his future, Ambro doesn’t have any problem. The midfielder believes that he never really think about any offer from other teams as staying with the Rossoneri has always been his main option, especially since he is currently the captain of the team.

“I’m happy, this is what we all wanted. My intention was always to stay with the club. Milan is a high level club that have important goals along with very passionate fans,” said Ambrosini.

Beside talking about his new contract, Ambrosini also give a little opinion regarding his club’s transfer market by hailing one of the players that have been heavily linked with Milan recently, Javier Pastore. Answering the question about the Argentinian, the captain hinted that he would welcome the Argentinian international by saying that the Palermo star would be suitable for the Rossoneri, especially because he already familiar with the Italian Serie A.

“Pastore would look a bit skinny in our jersey (laughing), but he would be a great in a club like Milan. He is one the few players that can influence a team and he is also very familiar with the Italian league,” the captain said.

Although this statement is pretty much a personal thought from Ambrosini, but it can also be revealed that the Milan captain would pretty much welcome Pastore’s arrival to the club. A very interesting statement that could make the Rossoneri fans gets more curious on who would be the new signing that the will arrive at Milanello this summer, especially after the team’s owner, Silvio Berlusconi, already promised another gift for the tifosi.