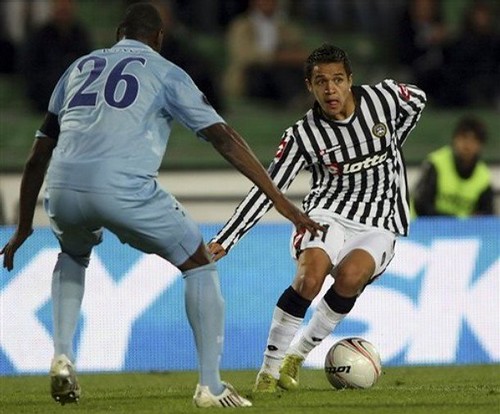 Soon Italian football fans should be prepared to hear another unpredictable rant by Palermo president, Maurizio Zampirini, as this weekend his team Palermo suffered a shocking defeat against fellow European competition chaser Udinese.

Instead of commenting about the referee, this weekend Zampirini might be making some vicious action towards his team as the Rossanero were not only beaten but also got trashed 7-0 by the Bianconeri.

Playing in Renzo Barbera, it wasn’t Javier Pastore or Josep Illicic that steal the show but it was Udinese duo, Alexis Sanches-Antonio Di Natale, that completely took the weekend by storm as those two scored all of the goals for their club. Di Natale keeps on chasing Edinson Cavani on the top scorer list as the striker got a hat-trick today, while Sanchez surely make his prize in the transfer market gets even higher after the Chilean bagged four goals on the match.

Coming into the game from two consecutive defeats, it’s evident that Palermo players’ confidence is at all time low as it took the visitor only about nine minutes to struck the first blow through Di Natale’s glancing header. Struggling to equaling Udinese’s fiery performance, the home team wen’t two goal down 10 minutes later as Sanchez opened his account on the game after capitalizing on the Rossanero’s defenders failure clear a ball from the corner.

Things got worse for Palermo midway in the first period as Sanchez scored a stylish goal from a swift counter attacking football that saw the home team committed too many men forwards leaving plenty of gaps at the back. Receiving a pass from Di Natale, the Chiliean international broke through on his own and beat Salvatore Sirigu with step overs trick before slotting the ball into an empty net.

Frustrated with the result, Palermo players starting to lose their head and Armin Bacinovic was the one that lost his concentration, getting himself sent off after making a second bookable offense even before the first half ended. Playing with 10 men after already going 3-0 down, the match simply got too hard for the Rossanero as the away team managed to add two more goals in the last five minutes though Di Natale’s easy tap in and Sanchez wonderful solo effort from the left flank.

Starting the second half 5-0 up, Udinese doesn’t show any intention in stopping their attacking approach as the Zebra’s got another one just three minute after the restart as Sanchez got his fourth goal on the night. The Chilean international, scored another fine goal after slotting the ball into Sirigu’s far post from a very tight angle, but once again Palermo’s defending can be questioned as about three players just don’t seem to know what to do.

Just as playing with 10 men didn’t caused any trouble for Palermo, the Sicilian got themselves another sending off, this time for their young defender Matteo Darmian, who hauled back Armero in the penalty box. Not only that incident left the home team playing with only nine men, Delio Rossi’s side also received a penalty that was executed superbly by Di Natale, making the scoreline change once again into 7-0.

Despite there’s still plenty of time after that seventh goal, Udinese seemed to stop playing as fighting against a demoralized 9 men Palermo squad doesn’t interest the players anymore. The match pretty much switched off after that penalty goal as there’s no chance the home team could even get a consolation goal considering their dismantled condition on that match. This result surely confirmed Udinese’s status as the current on form Serie A team in the new year, while for Palermo, this defeat could mean the end for their coach Delio Rossi, who before the game have already hit by plenty critics by Zamparini