A Swedish coach at the World Cup, but not the one you’re thinking of 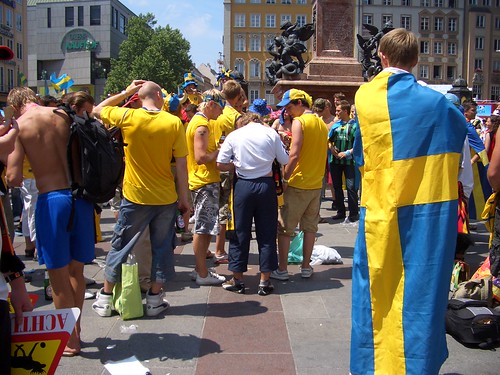 A bespectacled Swedish coach with a receding hairline appearing at yet another World Cup finals.

No longer with the nation with which he is most commonly associated and accused in some quarters of only taking the job for the money. No, I am not writing about Sven Goran Eriksson.

This is about Lars Lagerback. This will be Lagerback’s sixth consecutive international tournament. He was the coach of Sweden for nine years, from 2000 to 2009. Prior to that he had been the assistant for the national team, B team manager and under 21 manager before that. Lagerback has been involved in international football for twenty years. He was appointed the Nigeria coach in February of 2010 and has proven to be a quite popular choice. The results have not improved dramatically under his tenure, Nigeria recently drew with Colombia and Saudi Arabia, but there is an optimism surrounding the squad. In their latest friendly Nigeria impressed against North Korea, winning 3-1, but playing with confidence and a fluid style.

Lars Lagerback has insisted on team unity and discipline, never Nigeria’s traditional strong point, and at the moment the players are listening. The Nigerian Football Federation will be looking to Lagerback to bring the best out of a talented, balanced squad including players with premiership experience like Yakubu Ayegbeni and Obafemi Martins, both of whom scored against North Korea. Mikel John Obi is no longer available meaning Lagerback might change the teams system. Initially he was planning on using a standard 4-4-2 but without Mikel he might now switch to a 4-5-1. Switching to a 4-5-1 Obafemi Martins might be asked to play in a wide attacking position. This is exactly the type of circumstance that usually heralds the beginning of the end of a managers authority but Lagerback has handled it appropriately and Martins seems willing to follow his managers instructions, for the sake of the collective.

Lars Lagerback will have to show more initiative then he did during his time with Sweden. Sweden only qualified for the knock out stages twice under his tenure, losing to Germany and Holland. Lars Lagerback developed a reputation as a man for the qualifying group stages but not for the finals themselves. This will be Lagerback’s sixth major international tournament. He has the experience and if he can strike a little gold, a successful innovation or a game changing substitution, he might just become the most famous Swedish coach overnight.