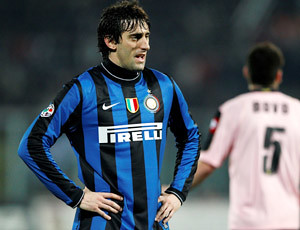 Previously there were reports from Italy stating that there has been an illegal approach regarding the transfer done by Inter Milan and Genoa regarding two Inter new players’ last season, Diego Milito and Thiago Motta. The news revealed that the Nerazzuri’s boss, Massimo Moratti and the Grifone’s president, Enrico Preziosi have committed an irregular transfer method that allows those two players switch sides.

After the investigation and hearing, the FIGC has finally made a decision that probably a bit disappointing for those justice seekers out there as the sanction decided for both clubs’ behaviour is only a fine and a ban for Moratti and Preziosi. Genoa as the players’ previous owner will be forced to cash out 90,000 Euro and their president will face a six month ban of involvement in the transfer market, while the Nerazzuri gets a lighter punishment by receiving 30,000 Euro fine and a three months away from the market involvement for the club’s patron.

Surely it is the lightest punishment that the scenario had in store as previous speculation stated about the possibilities that might be a cancellation over Motta and Milito’s deal or a point deduction for both clubs, especially knowing the fact of how crucial was the latter in Inter’s treble winning achievement. Having an illegally bought players, especially if one is responsible of winning important games for the club would obviously raise the eyebrows of some people, especially after the Calciopoli thing happens not long ago.

This punishment is also being consider very light because, even though both Inter and Genoa receive a fine and their presidents is ban from making negotiations in the transfer market, it won’t stop the club from buying or selling players. In general the sanction didn’t mean a great deal for both teams as that amount of money won’t be a problem for both clubs, and their presidents involvement on the transfer market isn’t actually a highly important factors for the teams’ success in acquiring new players as professional clubs do have their own people on that department.