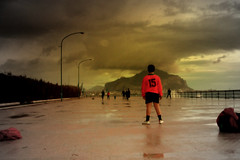 No, this isn’t the entry list for the Cannes Film festival short production section or an assessment of the Juventus squad. It’s just the scenario facing Arsenal, Manchester United and Chelsea. Respectively, Arsenal are a defender short, Manchester Untied a central midfielder and Chelsea a striker. Whichever squad suffers serious injuries, or loss of form, first will be the one, obviously, to suffer. That all three of the club’s seen as, collectively, the group from which the winner of the Premiership will emerge should have such glaring weaknesses in their squad is an indication of the collective thrift consuming the English Premiership. Nevertheless, the weaknesses are true.

Arsenal in central defence will rely, initially, upon Thomas Vermaelen and Laurent Koscielny. Should injuries occur they will call on Alexandre Song, primarily a central midfielder, and then Johan Djorou, a capable player who, however, was considered not good enough for Birmingham not too long ago. That’s a relatively weak central defensive core. The likes of Everton, able to call on Joseph Yobo, Phil Jagielka, Johnny Heitinga and Sylvain Distin, or Tottenham, able to rely on Ledley King, Michael Dawson, Younes Kaboul, Sebastien Bassong, William Gallas and occasionally Jonathan Woodgate, have far more options. This is Arsenal’s evident weak spot and should injuries occur in this position, nobody will be able to say that such a problem was unforeseen.

Manchester United have a somewhat similar problem although their issue is less quantitative and more qualitative. In central midfield Manchester United can call on Paul Scholes, Darren Fletcher, Michael Carrick and Darron Gibson. Even Ryan Giggs and Ji Sung Park can play there. Soon Anderson will have returned from injury and offer himself as an option. Owen Hargreaves, eventually, might do the same. The problem is not to do with numbers. It is more to do with a lack of quality. When performing well it is difficult for anybody to deny that Carrick, Gibson, Giggs and Park are capable central midfield players. The problem is none have performed especially well in central midfield consistently for quite some time, at least not in the games that truly mattered (Chelsea 1-2, Bayern Munich 1-2 and 3-2). Michael Carrick has been out of touch and out of favour since the Champions League final Manchester United lost to Barcelona 16 months ago. Anderson is only returning from a broken leg. Giggs has continued to perform well when on the left side of midfield, not as a traditional winger, but as a left sided central midfielder, usually in a formation of 3 central midfielder players, but if Sir Alex Ferguson wishes to continue with the 4-4-2 formation he has favoured so far this season then he needs more alternatives in central midfield. The reliance has been heavy on Darren Fletcher and Paul Scholes. Should this reliance continue the pair will not be able to cope for an entire season. Manchester United need to help the likes of Carrick, Giggs and Anderson find their form again in central midfield.

Chelsea, meanwhile, have only 3 forwards on whom they can call, if we exclude the youth of Daniel Sturridge. Didier Drogba is obviously the first choice striker, Nicolas Anelka supporting him either in the central or on the wide right. Salomon Kalou operates as the 3rd alternative. Beyond that, the options are scarce. Last season Drogba and Anelka shot Chelsea to glory but if either is injured for a notable period of time then nobody could be sure Kalou could replicate what was on offer before and score a similar amount of goals. Kalou’s talent is quite obvious, he is a skilful and clever player, but he does not score as many as Drogba or Anelka. Might a couple of injuries happen and Chelsea would be relying on promising youngster Daniel Sturridge. The young striker signed from Manchester City promises much and indeed looks capable, but that is no guarantee of goals.

Manchester United, Arsenal and Chelsea all have obvious weaknesses in particular parts of their squad. The question is whom willfortune favour when it comes to injuries?