Of Groins & Groans: U.S. vs. England Wrap Up 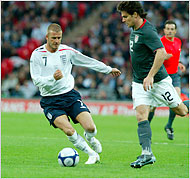 I’ve waited forty-eight hours to write about the U.S. MNT’s failure against England. I’ve held back because I was afraid I would write something I would later regret if I spewed the vitriol I felt immediately after the game ended.

Well, it’s been two days and I am still feeling a frenzy of disdain for our performance. I hoped time would heal my disgust, but if anything its actually become more acute.

England is a world class squad, so please don’t mistake my comments of distress over the U.S.’s play for backhanded swipes at the English side. But, they are the type of competition the U.S. will (if it qualifies) be playing against in approximately two years at the World Cup, so they are the best gauge of our current abilities and potential.

Or should I say the best gauge of our utter lack of current abilities and potential.

While the final score didn’t look too abhorrent, it easily could have been much worse. Capello actually showed restraint. I imagine the little cartoon angel on his shoulder persuaded him to stay satisfied with the 2-0 result. The 71,000 plus fans at Wembley meanwhile were playing the role of the little cartoon devil as they goaded the team to continue their offensive onslaught.

Yes, that’s right. You’ve read that correctly. 71,000 people at a soccer match. An exhibition match, no less. Not even full capacity for Wembley, which is 90,000.

Yes, MLS fans, this is what they call a “soccer specific stadium” in parts of the world where soccer is mainstream. A bit larger than the HDC, no?

While the fan support for England was awe inspiring, it didn’t make a lick of difference on the pitch. This game could have been played in NYC (or on the Moon for that matter) and the result would have been the same.

So, what went wrong?

Well, not to make excuses, but (and here’s an excuse) it really sucks Donovan felt that his groin was too tight to play. He is our best player and offensive catalyst, and that was all the more obvious as the game wore on and the U.S. continued to lack an offensive spark.

I imagine if Donovan’s groin is still sore before next Wednesday’s matchup with Spain, every guy on the team will volunteer to massage it for him. Heck, Bob Bradley has already got the candles lit and the oil ready for LD’s big pre-match rubdown. Sorry for that visual image guys…

But, even had LD played, he likely would not have made much of a difference. The defense was flat out flat-footed. Onyewu played his best, which makes the result all the more pitiful. Pearce, eh, he made an effort. I would comment on the other defenders’ play, but I am not sure I saw them out there. I certainly never heard their names called.

The first goal was a farce. Sure, it was a nice cross by Beckham and a perfect finish by Terry, but Terry looked as if he was all alone. I don’t know which of the three players standing around Terry was supposed to be marking him, but if it was all three, than we have a bigger problem on set pieces than I thought.

Onyewu was beaten so badly for the second goal, it was hard to imagine the same player dominates forwards for his Belgium side. I guess nobody in Belgium can deliver laser-like passes with the accuracy of Gerrard though.

But it wasn’t just that the English offense looked as if it was playing a video game on the novice level, it was also that our offense completely lacked chemistry and charisma. The number of quality attempts? Oh, I don’t know, maybe two? And that’s actually being generous.

Did anyone play well?

Yes, but just Adu. That’s it. He came in late, and almost scored, which would have at least made the result palatable. But, even he was denied. It’s a shame too because Bradley needed a wake up call informing him he needs to play Adu now and maybe the garbage time goal would have sufficed.

Experience isn’t something you learn on the pine, which is a shame because, if it were, Adu would be the most seasoned young player in the world right now.

Play Freddy, Skeletor. What do we have to lose?

Oh, and bring Altidore as well and stick him in up top with Adu. I don’t want to hear “Oh, Jozy is so young” and “Oh, he’s not ready.” Well, Wolff and Johnson didn’t look very ready out there either. In fact, they have already proven that they are not the answer up top for the U.S. Sticking with them would create predictable (losing) results.

Oh, and Jozy didn’t look too young or inexperienced in the Mexico game when he hammered that header past Ochoa after leaping over Marquez, one of the best defenders in the world.

I am so sick of hearing people claim Adu and Altidore are too inexperienced to merit serious playing time. How will they ever become more experienced if they never play? They need to go the full 90 against the best now, not wait ’til 2010.

One young guy who is getting experience (and it shows) is Young Bradley. Sure, he gave the ball away foolishly a few times, but the kid has the complete package: skill, athleticism, and hustle on both offense and defense. Paired with the defensively-minded Maurice Edu, he could become the U.S.’s best scoring threat other than Donovan.

But of course, for that to happen, the Elder Bradley’s crush on Ricardo Clark would have to come to an end. Personally, I would never play Ricardo Clark. At least not until he could prove he could think and run at the same time.

If you’re playing against a team with David Beckham, methinks you should avoid awkward intentional fouls of your opponent right in Beckham’s favorite set piece spot. Also, if you are going to play midfield, you need to play defense occasionally too. Barry was completely unmarked on the second goal thanks to Ricardo, who was almost humorously wandering the center of the field by himself when England’s death blow was dealt.

I would go on about how EJ should be done with MNT duty, Beasley looks like he’s lost a step and Wolff should audition for the next Invisible Man movie, but I am too fed up to even keep typing.

Here’s to hoping the U.S. looks more cohesive against Spain next week.