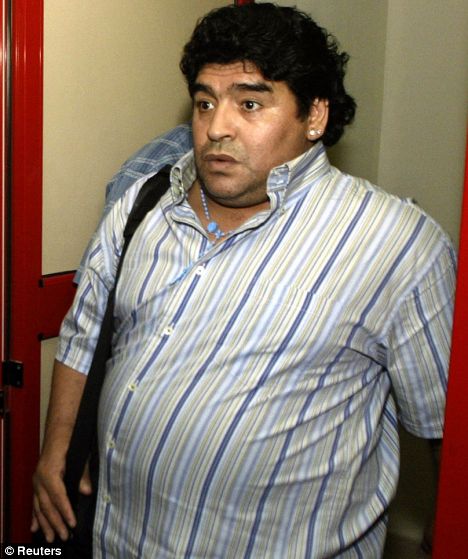 The Sin: Gluttony is one of the most digusting sins, and Maradona exemplifies it in the pic at left. By the time this shot was taken, the man who was the best player in the world (maybe ever) had indulged himself to excess on food, wine and drugs. He failed to abide by Proverbs 23:21, which states that “[f]or the drunkard and the glutton shall come to poverty; and drowsiness shall clothe a man with rags.” Gluttony wages an ugly war vs. the virtue of moderation.

The Sinners: When it comes to the US Nats, the most famous glutton ever is likely Clint Mathis, who ate and drank his way out of the player pool. But, even still today, some players are certainly guilty of ignoring their natural limits and overdoing it so far as food and drink are concerned. Look @ Onyewu, whose ever-increasing size has rendered him a step slower. I’m also going to throw DMB’s name out, as his lack of fitness limits him to sub duty.

The Saints: In order to succeed @ the 2010 World Cup, the US Nats must exhibit mature temperance, instead of impulsive gluttony. They must put down their forks when full and avoid all-you-can-eat buffets and extravagant four-course dinners. Which players can ensure the whole squad keeps a healthy balance. Tim Howard, for one, who is widely reputed to be a teetotaler. I will also add Mr. Hejduk to Santa’s nice list, as he has stayed fit as he nears 40.

The Sermon: Gluttony is the sin I abhor most because someone who overindulges not only inflicts a self-injury, but they also deprive another more needy person of much needed sustenance. For example, look at Rosie O’Donnell there. Her figure isn’t Rubenesque, it’s Hindenburgesque. Obese ogres like Ms. O’Donnell obsess over their food and drink, and they lack the self-control to suppress their sweet tooths. The US MNT must be fit, not fat, to succeed in 2010.

In addition, the players also need to be certain to avoid being one specific type of glutton: a glutton for punishment. They need to make the most of their opportunity for glory and resist the temptation to over-indulge. Most of all, they must erase that image of Rosie from their memory. I know I am trying to do the same thing already, but it feels like it has been seared into my brain for all perpetuity. I was just trying to make a point about excess, and now I know…

You can’t “have your cake and eat it too”. Well, unless you are Rosie. In fact, she is the only person in the world who is speaking in literal terms when she indicates she is “so hungry she could eat a horse”. If you take just one thing away from this post, remember this:

Never, ever ask Ms. O’Donnell to “eat your heart out”. Words to live by, no?