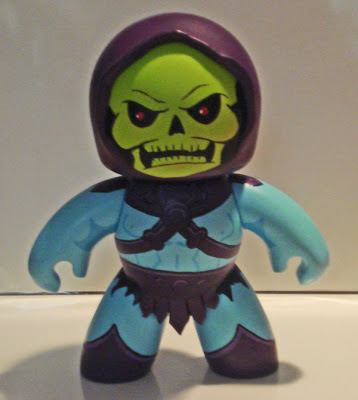 The Sin: For those of you who were wondering: yes, that is a miniature inflatable Skeletor. As regular readers know, I have christened Bob Bradley “Skeletor” due to the resemblance his bony visage shares with that of He-Man’s nemesis. I don’t mean the nickname as a slight, mind you, I just think both men share a sometimes wrathful look, which isn’t necessarily a good thing. After all, “the wrath of man worketh not the righteousness of God” according to James 1:20.

The Sinners: Bradley is a pretty patient manager though (maybe too patient), so his wrath concerns me little. I am worried about Bradley the Younger though, who has exhibited poor impulse control in the past. I’m also somewhat concerned about LD, who does not play very well when agitated. These men need to put their personal pride aside and hold their tongues during the 2010 World Cup. If they display rage towards opponents or teammates, we will lose.

The Saints: So, who can keep these hotheads’ tempers in check? How about savvy veterans and role players like Jay DeMerit, Kyle Beckerman and Brian Ching. While these guys may lack the same talent as our marquee stars, they make up for it with their cool demeanor on the pitch. These three guys aren’t player-haters. Heck, they ain’t haters at all. Instead, they can help curb some players’ desire for vengeance against an opponent at any cost, even a red card.

The Sermon: Letting our emotions – instead of our ability to reason – dictate our decisions can only lead to uncontrollable feelings of anger and eventually remorse. The US Nats must rein in their fiery passion and play with a calm chemistry. Moreover, our men must reject their desire to boisterously blame others for their own mistakes. Like Axl Rose once sagely said, “all we need is a little patience.” Hopefully, America’s own Skeletor can create a squad that doesn’t self-destruct.

If he can, he will be revered in the US for his ability to dominate opponents in a calm, surgical manner, just like the cartoon Skeletor was heralded by peons as the cold-blooded “Evil Lord of Destruction of Eternia.” But, Skeletor never could best He-Man himself, so let’s all hope our man Bob has no such Achilles’ Heel. Let’s hope he can avoid having to give people a piece of his mind throughout the squad’s preparations for the Cup. Let’s also pray everyone is fit.

Otherwise, Skeletor may just have a fit. So, I know what you are thinking, if Bradley is Skeletor, who is Panthor (his tiger steed and the arch enemy of Battle Cat)? Got to be Sorbs, Mike Sorber. I mean, the dude may someday even have the power of Grayskull. Hey, that’s another good nickname for Bob, “Grayskull”.

Ah, perhaps it is actually I that have the power, huh He-Man?