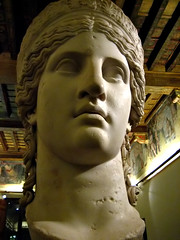 The Month: The month of June derives its name from Juno, the Roman goddess who called Jupiter her hubby and spawned Mars, Minerva and Vulcan. She was known as a special protector of those who worshipped her, and famous literary lads like Bill Shakespeare always portrayed her as a cruel, warlike god. Thus, she was a tough broad, but one who utilized her powers to protect those who needed her support. She sort of reminds me of our US MNT. Why?

Well, our team certainly was tough. They could respond to (almost) every attack they encountered at the World Cup. Moreover, our squad definitely had the capacity to be cruel, what with their bone-crushing tackles, mind-blowing comebacks and (of course) maddening final result. In the end though, the team protected our national pride by advancing out of the group stages and putting on a thrilling show in the knockout round. We didn’t play like gods.

But, for one month, we did produce some supernatural soccer on the world stage.

The Men: Yes, the sweltering month of June produced some heated moments for our US Nats. I will provide you with in-depth analysis on each member of our roster in a few days, but for now I will just give you my thoughts on our performance as a whole. Ultimately, I believe we witnessed a gritty, resilient squad in South Africa. I believe we saw a coach who knew his team, but had preconceived notions about certain “favorites” of his that hurt us in the end.

The end is where we are at, ladies and gentlemen. Our World Cup dream has ended in nightmarish fashion, but we did experience some unbelievable moments of joy at this tournament. We proved we could go toe-to-toe with just about every other side in the world, at least in my opinion. We played like a boxer who could take the big punches and still respond with devastating upper-cuts of his own. I am pleased with our play, even as I am despondent over the result.

The Musings: It is still hard for me to convey my complete feelings about the US team’s performance at the World Cup because I am incessantly torn between my joy over our thrilling comebacks and my grief regarding our final result. All in all, I can just provide you with one musing I am sure of: I love this team and I want it to succeed in the future. What that future will look like is still undetermined at this point. It is unknown to all but Doc Brown.

Seriously though, I have enjoyed writing about the US team during this World Cup cycle, and I will provide you with a little more analysis over the next few days (including Doc Brown’s predictions for the 2014 World Cup and my US player ratings). So, come back to STO to keep hearing my musings on the US team and the world’s most beautiful game.