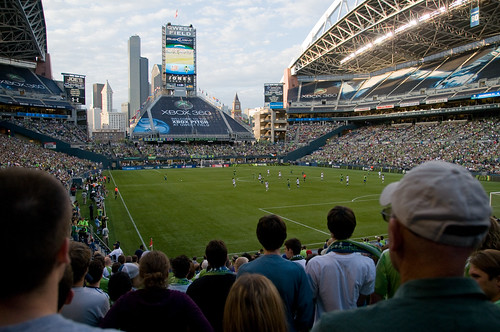 The Side: If Sigi Schmid could get on The Price Is Right, I am betting Drew Carey would ensure he got through to the Showcase Showdown. How could he deny Sigi, who in just one season turned Seattle into a bona fide contender for the MLS Cup. Sigi has always been one of the best coaches in the league, but he is also buoyed each game by the terrific response he gets from the side’s supporters. The Sounders sold out every home game in 2009. W-o-w.

The Pride: Yes, you read that correctly. Seattle broke the MLS attendance record for a single season, and now they are primed to push their record even higher in 2010. I think those fans will have plenty to cheer for too. After all, they have one of the league’s top foreign stars, Mr. Ljungberg (aka “The Swedish Becks”). They also possess one of the league’s best young talents, Mr. Zakuani. Finally, they have Kasey Keller between the pipes. Need I say more?

The Guide: I am planning a trip to Seattle to see some soccer soon. I don’t have any “favorites” in MLS (I promised the Mutiny I would never love again), but I like Seattle’s style of play. Their strong strategy led them to hoist the US Open Cup last season, but how far can Sigi & Co. go in 2010? I will put the chances that they hoist either the MLS Cup, US Open Cup, or Supp. Shield at 14:1. This isn’t The Price Is Right, you don’t have to wager $1 if you bet last.

But, it is encouraged.