Ladies and gentlemen of America, I don’t know you. I don’t know what you like or what you dislike. I have to assume you enjoy things that are fun and exciting. I also have to assume you hate things that are boring and dull. Thus, I just don’t understand why you are not eating up the 2009 MLS Playoffs. After all, the Conference Finals this year were more exciting than they have been in the entire history of the league. The games were both close. They both featured amazing play.

In fact, I am going to go ahead and say what real US soccer fans are thinking: If you still think soccer sucks and Tuesday night poker on ESPN is better, then I must say to you – and pardon my Francais – VA TE FAIRE FOUTRE. Yes, I said it. At least I think I did. After all, I don’t speak much French. In fact, pardon my English, but if you’re French, you should GO SCREW YOURSELF. Sorry about that. What was I talking about again? Oh yeah…

MLS just produced two of the greatest Conference Finals in league history. If those games didn’t entertain you, you lack a pulse. Both LA v. HOU and RSL v. CHI were great matches. They represented everything we US sports fans love. Most of all though, they explained why soccer is “the beautiful game.” By that I mean that they proved that soccer (ever low-scoring soccer) can be very, very exciting. It is time for us Yanks to get over our BS excuses. Soccer is here to stay.

As for the Galaxy’s win, I must say that Bruce Arena deserves some sort of Nobel prize. He can now take his team from worst to first with a win over RSL in the MLS Cup Final. If he does manage to pull it off, it will prove that (A) Landon Donovan is the greatest MLS (and US) player in history; (B) the David Beckham Experiment was not a failure, but – in fact – a success; and (C) that Alexi Lalas was the deadliest cancer any soccer team could ever be infected with.

As for the so-called “Eastern Conference Champions”, Salt Lake (yes, I know that makes no sense, but at least MLS is consistent since NY won the West last year), I think they could possibly best LA in the Final. After all, they looked great as they stunningly beat Chicago on penalties to qualify for the Final. Also, they won only two games away from Rio Tinto all season until the playoffs. Now, they have picked up Ws at Columbus and Chicago in consecutive weeks.

So, the Los Angeles Galaxy will take on Real Salt Lake for the MLS Cup Final. If you saw that coming, you are obviously a witch and I will recommend to the townies that you be burned at the stake. It’s a great story though. No matter who wins, the entire league (and its diehard fans) are the real winners. Maybe now people will start to realize that MLS is as exciting as the other so-called “major” sports leagues. Maybe now people will start to take the league seriously. 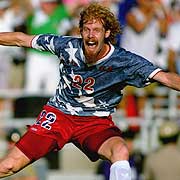 OK, maybe not. After all, MLS is still just a cherubic child. But, memorable games like the two Conference Finals we saw last week can only help the league grow. As for this week’s Final, I like the Gals. After all, no story could be better for MLS than LD and Becks overcoming adversity to win it all. In fact, a Gals’ victory is win-win for everyone. Well, except RSL, of course. And, I guess, it would also be bad for Alexi Lalas. But, that ginger has brought shame to our people.

Eh, who cares? After all, he does have life-long immunity due to his legendary goatee…