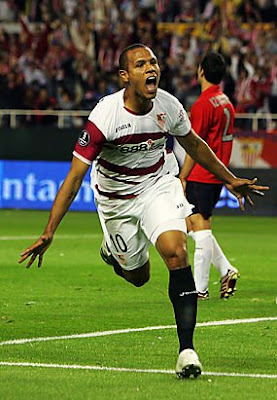 It is never easy picking the dishonorable awards, but Luis Fabiano is the unfortunate winner of the 2009 LLTO Most Disappointing Player.  And to be honest it was a really hard choice to select  the star Brazilian player, but let’s face it when you’re one of the best players in the world, the regular standards or expectations do not apply.  And Fabiano was not terrible this season, he just wasn’t spectacular.

In all fairness I will admit that Fabiano was one of the best players in all of La Liga in one particular category.  During the Copa del Rey the Sevilla striker scored an impressive seven goals in five total matches.  So with numbers like that then why is he considered the most disappointing player? Because the tournament total made up nearly half the goals the Brazilian would score all year.

Fabiano could not get the ball rolling this year and finished the year in single digit league goals.  Fabiano could only muster 8 goals in 26 appearances this season which was only one third of the league goals the key player had the year before with 24 total goals.  All-in-all Fabiano’s numbers were only half of what they were a year ago when the forward was the second best goal scorer in La Liga.  This year he scored 17 goals if you count every tournament appearance, last season the young striker scored 34 goals in La Liga and Champions League play.

And to damper the  bad year a little more, Luis Fabiano really pushed for a move over to AC Milan this offseason.  Unfortunately, Fabiano’s hope of moving fell through and it looks like he will be back with Sevilla next season.  Perhaps next year he can bounce back and earn Most Improved Player.