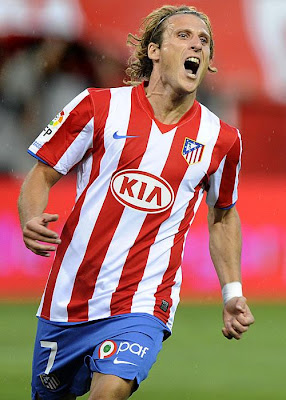 This is my favorite award to bestow, simply, because it involves no controversy or even extra work on my part.   The Golden Boot winner is not an opinion based award and is simply given to the best total goal scorer from 2008/2009.

Atletico Madrid’s Diego Forlan was hands-down the best offensive player this year for any club other then Barcelona.  The key forward scored more goals this season then any other player in any other major league in all 0f the world this season.

Forlan put 32 balls into the back of the net during league play for the 2008/2009 season which doubled his total from the previous year of 16 goals.  Forlan has been a tremendous addition to Atletico Madrid since arriving two seasons ago.  Forlan has 48 goals in his two years with the club   And Forlan also surpassed 100 career La Liga goals this year as well.  Forlan scored 54 for Villareal in 3 seasons before joining Atletico Madrid.  Not bad numbers numbers for a guy that was dropped from Manchester United five years back when the club signed Wayne Rooney.

So with over 100 goals in five seasons you would think that Diego Forlan would become of those familiar faces that every club in the world was bidding over.  Fortunately, that has not been the case for Forlan so far this off season.  It appears Forlan will remain at Atletico Madrid for next year and with all the weapons that Barcelona has, it will be hard for any one player to achieve more goals then Forlan next season.