As a companion to the Best “Steals” Roster below, here is my Worst “Deals” Lineup.

How do you like that, I can even rhyme! See, third grade teacher Ms. Wasserman, I’m not retarded like you said. And I will amount to… Well, let’s just leave it at “not retarded” for now.

The “steals” were players who played above and beyond their monetary deals, while the “deals” are the guys who steal your team’s money and then play poorly. The “deals” pilot your team about as well as that guy piloted the Hindenburg above. They are saboteurs of the most dangerous ilk: overpaid, out-of-shape team killers.

Now, don’t get me wrong, not all of the players below are out-of-shape whining schoolgirls. Some of them are fine players that are just not worth their price tag. Some are like the nice coat you see at the mall and genuinely like… That is, until you see the outrageous fortune required to procure it. I, personally, am not paying for any jacket that costs more than $1,000 unless its green and comes with a lesson from four-time Masters champion Tiger Woods. Come on, he doesn’t need that many ugly green sportcoats anyways.

Luckily, I found way more “steals” than “deals” while perusing the MLS salaries information. That is a damn good thing for the league. Because of the league’s precarious financial situation, its important that the talent the league can acquire is obtained as cheaply as possible.

Guys like Denilson, who make outrageous amounts and never play worth a lick for their benefactors, are a dime a dozen in many pro soccer leagues, but MLS cannot afford them and has generally done a fine job of avoiding overpaying for players.

I say “generally” because every rule has its exception. MLS calls these exceptions Alexi Lalas and Mo Johnston.

I think you’ll see why below… 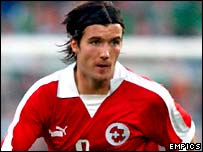 I know people will protest the inclusion of Wicky, who has yet to show what he can do in MLS, but I just don’t believe an MLS team should pay more than $200k for a midfielder unless he’s from South America and has a single name moniker with some form of accent mark I have never seen before.

As for what team has spent the most on the least, its got to be either Toronto or L.A. I know, SJE had a bunch up there as well, but if you think about it, that’s only because teams wisely decided to unload their “deals”for the expansion draft. SJE was therefore left in the compromising position of wanting the best players available, but also having to take on their bloated salaries.

Regarding TFC, I think you have to use the same reasoning as above. TFC ended up with lots of people’s high-priced cast aways last season, so I have to give Big Mo a little bit of a pass. After all, his franchise is still of breast-feeding age. Then again, the Toronto female fans are so devoted to the team, Maurice Edu could probably live through a nuclear holocaust off the milk of Red Patch Girls’ mammaries.

Speaking of disasters on the level of a nuclear holocaust, the Galaxy are, without a doubt, the worst offender when it comes to overpaying for players.

I am not going to criticize the Beckham decision. He is one of the best players in the league and while no MLS player should earn $6.5 million strictly for his play, Beckham likely makes 10 times that for the team in jersey and ticket sales.

I also have no problem with Donovan making $900k. In fact, I don’t think it’s outrageous at all. He is the straw that stirs the drink in LA, and if he were not well compensated, he would probably pout and play poorly. I love Donovan as a player, but I sometimes fear the “maturity” we have all been promised would gradually develop may never come.

The main reason I have the Gals as the worst dealers here though is because they don’t think through their decisions, they impulse buy. When they needed salary cap space, they got rid of their best defender Chris Albright ($160k), but held on to Abel Xavier ($156k) and then paid 100k to the somewhat geriatric Greg Vanney. So, L.A. saved $60k, but what they lost in the back was worth way more than that.

And why did they need the $60k? To pay it to Ruiz? Jeez, and I thought fresh Fish was expensive in Alabama!

Speaking of The Fish, I am going to go ahead and label him the biggest weight hanging around any team’s neck. Why not Reyna? Well, Reyna is a DP, so he doesn’t count against the salary cap. Ruiz on the other hand… Well, let’s just say that if the Fish can’t heal quickly and contribute to the Galaxy, he will be probably used as trade bait.

Aren’t the never-ending fish puns great? So long as Ruiz is around, they will never be “fin”ished.